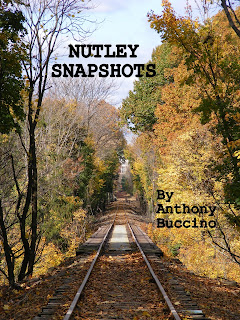 Anthony Buccino’s third photography collection focuses on the 15 year period from about 1999 to 2014, and includes more than 150 color snapshots of the Big Apple.

Nutley Snapshots - In Plain View
Volume one of a series of photo collections to showcase the all-around beauty and some of the history of the northern New Jersey township of Nutley.

Nutley Notables - The men and women who made a memorable impact on our home town, Nutley, New Jersey.

Buccino profiles individuals from politicians to high school coaches and athletes; from notorious personalities to beloved entertainers to the fellow in the local shop to the artists and writers who toiled long ago and today. Their images and stories document the unique contributions they've made that shaped Nutley today.

Belleville native Anthony Buccino has collected his favorite and most-requested writings about life and growing up in Belleville, New Jersey. Greetings From Belleville, N.J., is Buccino's fourth collection of essays but the first wholly dedicated to his collected writings about Belleville. More than forty essays and reflections on everything from junior high school bullies to selling pretzels for Ed Strat at Belleville High School football games at Municipal Stadium. This collection includes the Excellence in Journalism award-winning Don the TV Man.

More than 200 color snapshots of Jersey City, New Jersey, from Pavonia/Newport to Paulus Hook, from Grundy Park to Grove Street, along the Hudson River from the Colgate clock to Exchange Place, Harborside and through neighborhoods that have no names. Color photos bring you up close to New Jersey's second-largest city, its building boom and its broken ground. This collection is ideal for fans of Jersey City, and folks who've always wanted to visit.

Belleville Sons Honor Roll - Remembering the Men Who Paid for Our Freedom
The second edition includes additional information on Belleville in the American Revolution, War of 1812, Civil War, WWI, WWW II, Korea, Vietnam and peacetime casualties.In the last century, Belleville lost 156 sons while in service to our country. This collection, gathered from newspaper clippings and other sources collects what we know about these young men in an effort that their sacrifice not be forgotten.

Nutley Sons Honor Roll - Remembering the Men Who Paid for Our Freedom
Information about the more than 130 Nutley sons who died while in service to our country. Fourth edition.In the past century, 138 Nutley sons died while in service to our country. World War I took 17. World War II took 92 sons. The Korean War era took twelve sons. The Vietnam War took nine sons, and preserving the peace during the Cold War set its toll at eight Nutley sons. Here, in one source, beyond the names of the fallen, are their stories. Remember their sacrifice and familial heartache that paid for the peace and freedom on our tree-lined streets. 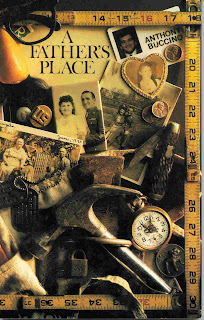 Sister Dressed Me Funny
Tales about, of all things, a naked statue and the catholic school tie, Italian American family roots and that dress his sister made him wear. Buccino's essays cut close to the edge of humor, humiliation and heartbreak chronicling education by the strictest nuns in the world at a school where the statues of saints were said to dance the Twist if you prayed real hard. A wistful reminiscence of life on the farm with chicken coops and too many cats in what is now at the very least suburbia; being the butt of the Cub Scout skit gone wrong in front of the entire pack, and, of course, that dress his sister made him wear.

Rambling Round - Inside and Outside at the Same Time
Anchored in New Jersey, Buccino pays tribute to the unique Garden State Parkway toll road, but you don't have to be from NJ to enjoy this collection.The best of Buccino's humor and homage to living life every day with tongue firmly in cheek. When he writes seriously, his stories infuse a nice warm feeling. Buccino's been called "New Jersey's Garrison Keillor, or something like that." His is the plain and simple view of the world around him.

RETRIEVING LABRADOR DAYS dog tales in prose and verse
Stories about each of his three Labrador retrievers and some of the other dogs, critters and people whose lives they touched. Shaggy dogs, mutts, mongrels, three Labrador retrievers and a pet rabbit inspire the stories and poems in this collection. Pets of one kind or another have shared the past six decades of the author's life, and here are some stories that will make you laugh out loud and others that remind you of the escapades and exasperation you've been through with your pets.

This Seat Taken? Notes of a Hapless Commuter
If you ever commuted to work, you'll enjoy reading Buccino's collection about the joys and follies of getting to and from work in the city using metropolitan public transit. 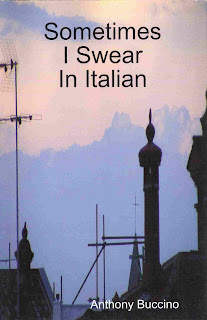 Sometimes I Swear In Italian
Anthony Buccino's collection about growing up Italian American in New Jersey and discovering the roots of his ancestors. Read about the old neighborhood where the 'bianca lina' man sold bleach to make the white linens; and the young boy growing up in the house his grandfather built, and living upstairs from his scary grandma who spoke no English. Despite its title, Sometimes I Swear In Italian contains no profanity in any language.

CANNED - Booted, bumped, down-sized, fired, forced out, hated, hired, jobless, laid off, let go, out of work, out-sourced, pink-slipped, terminated, sacked, unemployed
Verse about being out of work, the strains that tag along and the sinking boat you feel you're riding in. This collection deals with a difficult subject in a very real way. It's strength is its realness and that is also its greatest weakness. It's not for the faint of heart. A must-have for anyone who deals in human resources, personnel, recruitment, job placement, or has been fired, laid-off and is out of work.

AMERICAN BOY: Pushing Sixty
Verse about life and growing up in New Jersey in the 1950s,1960s, and 1970s, and growing older in the 1980s, 1990s and the oughts. From the center of the Baby Boom, this working class verse begins under a wooden class room desk as an air raid siren sounds, and captures the summer spell and its simplicity in drinking water from a garden hose. It's a mystical carpet ride through the past few decades and the journey ends with the author pushing sixty questioning the loves and lives past as well as what might be over the next hill.

SIXTEEN INCHES ON CENTER
Seeing a father through a grown son's eyes. The son of a World War II veteran looks at the 20-plus years they had together, the missteps the missed opportunities, and the things that remain.

VOICES ON THE BUS train, subway, sidewalk and in my head
Verse about commuting in Northern New Jersey. Feel the rhythm of the rails as you travel the last days of the Newark City Subway, or the PATH, and be relieved you are not present to hear the Preacher Man or Mr. Tourette's but do listen for the noise above the hum of the wheels and turn your ear to the voices on the bus, train or standing nearby on the platform. Who knows, you may catch a glimpse of Murray the Groundhog preparing for a special visitor.

ONE MORNING IN JERSEY CITY
Verse written along the Hudson River in Jersey City, N.J. You can hear a lot by looking around. Sometimes, standing along the Hudson River shoreline, you can dream of the freedom in the sailing beauty slipping through the waves, or question the signals proffered by a hungry seagull, or ponder why the pigeons follow you. Or you could sit ever so still and listen to the clatter of heels on the tile as the cigarette mafia heads outside for fresh air, while you slip in among them and consider the steel and glass surroundings. 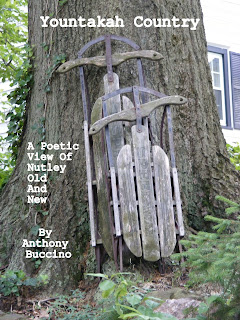 YOUNTAKAH COUNTRY A Poetic View of Nutley, Old and New
Local writer takes some history, some folk lore and some current news and mixes them together in this humorous and thoughtful collection of verse about the little town in north eastern Essex County. On these pages, Anthony Buccino brings together the Leni Lenape, Annie Oakley and pizza wars.

Martha Stewart Doesn't Live Here Anymore and other essays
A chapbook of essays focusing on the household trials of author Anthony Buccino, based on his Rambling Round newspaper columns. Read all about Dad vs. house (hint: house wins.) If you ever lived in a house or an apartment, or wished you had, then buy and read this little book now! You’ll find it’s funny, yet true. Collection is a preview of full-length Rambling Round collection.

Copyright © 2012-2018 by Anthony Buccino, all rights reserved. Photos and content may not be used for commercial purposes without written permission.