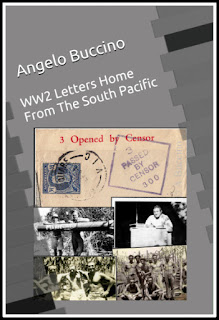 WW2 Letters Home from the South Pacific by Angelo Buccino (Cherry Blossom Press ISBN 9781729270219) is one GI’s view of the war amid the heat, bugs, carnage and noise in an artillery battalion supporting First Marine Division at Guadalcanal and other islands that never get mentioned.


Buccino wrote these long-lost letters to his best friend back in the states asking about the old gang.

"Met there’s dam little I can write about from this end. But I’m okay & still kicking that’s the main thing."

These missives turned up nearly sixty years after they were mailed, censored, read by his buddy and then found again in a forgotten footlocker in his old friend’s attic.

Along with a stack of Angelo’s photos from training and across the ocean, we’ve put together this collection in time for his 100th birthday.

The war aged him, and he passed in his sixth decade. Here is a way to remember him, his sense of duty, his sense of humor, and the years he spent on hot bug-infested islands defending all he left at home.