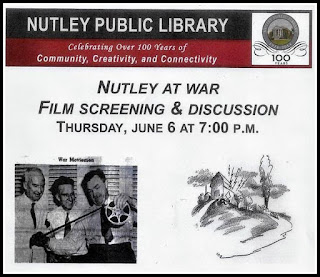 NUTLEY NJ -- Township historians John Demmer and David Wilson will host a screening of Nutley at War, a 1942 film by the Nutley Defense Council that has not been shown in public since 2002.

Recently restored footage in this forty-minute film will take you back in time when Nutley organized its citizens to prepare for enemy attacks.

Scenes filmed throughout Nutley, familiar family names, interior and exterior views of old Nutley buildings, and a celebratory parade document the hard work and dedication of Nutley neighbors. Recently discovered material relating to the making and marketing of the film will also be shown.

Local author and historian Anthony Buccino will speak briefly about Nutley servicemen in the Normandy Invasion of Fortress Europe on the 75th anniversary of the D-Day landing.