WW2 Letters Home From The South Pacific by Angelo Buccino

Historian Anthony Buccino will meet with the Nutley Old Guard at 9 a.m. on Friday, June 14, to discuss his dad's letters home from the South Pacific during World War Two. 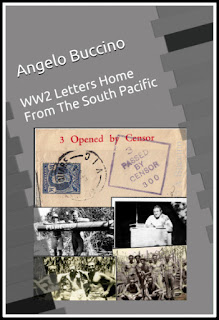 WW2 Letters Home from the South Pacific by Angelo Buccino is one GI’s view of the war amid the heat, bugs, carnage and noise in an artillery battalion supporting First Marine Division at Guadalcanal and other islands that never get mentioned.

Buccino wrote these long-lost letters to his best friend back in the states asking about the old gang. They turned up nearly sixty years after they were mailed, censored, read by his buddy and then found again in a forgotten footlocker in his old friend’s attic.

Hear the whole story of their discovery, the words of a young man far from home, and why they were published in November 2018.

The Old Guard of N.J., Nutley Chapter No. 7, meets weekly on Friday at 9 a.m. at the Frank A. Cocchiola Parks Building, 44 Park Avenue, Nutley, NJ.

New members always welcomed. Stop in at any Friday meeting and say hello.